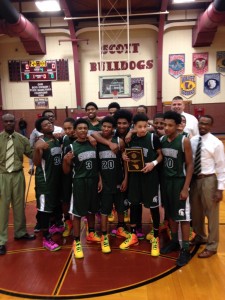 Despite getting off to a slow start, the JV Boys held their composure to come back and defeat the Scott Bulldogs, 62-56. The Spartans are the JV City League Champions. Behind Depree Lawler’s six 3-pointers and game leading 18 points, the Spartans battled back to take a one point lead headed into halftime. The Spartans were also sparked by Jahneil Douglas’ work on the boards and six points in their comeback. Santo Perez, Chase Wanamaker and Chris Reed contributed to the win as well. Ben Wortham stayed steady in the face of continual Scott full-court pressure to keep the Bulldogs at bay. Scott closed the lead to 4 points late in the 3rd quarter but the Spartans went on an 8-0 run to increase their lead to 12 and never looked back.