On a perfect night for football, the visitors from Whitmer scored early and often to defeat the Spartans, 48-0. The offense struggled to move the ball which put the defense in a tough spot all night. The Panthers scored on 4 consecutive possessions in the first half to put the Spartans in a deep hole in which they never recovered.

Also honored before the game were two former Spartans whose lives were lost over the past calendar year. Valjon Foster, a 3 year starter for the Spartans, was honored at midfield along with his family members as well as long time Spartans supporter, Dave Alfred.

The next home contest will take place on September 6th at 7:00 PM versus Fremont Ross High School. 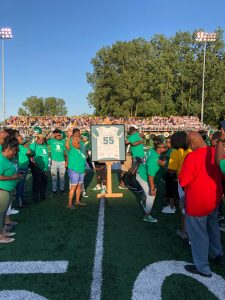