The Spartans struck first with Jeremiah Beringer hooking up with Michael Johnson on a long pass play. However, the Indians battled back to take the lead before the Spartans scored twice before the end of the half. Beringer again found Johnson on a 27 yard touchdown while also completing a short pass to senior Adriel Maddox who then scampered  45 yards to the end zone.

In the second half, the Spartans were aided by a 4th quarter punt return and their defense which stood tall after the Indians were threatening to take the lead late in the game.

The win moves the Spartans to 1-5 overall and 1-0 in the City League. They will next be in action at home versus the Scott Bulldogs for Homecoming. Kickoff is at 7:00 PM. 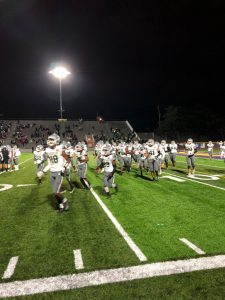